Named “Ana no duerme“, this song was composed by argentine musician Alberto “Flaco” Spinetta in the late sixties. Its main character, a teenage girl, finds a scape to the claustrophobic feeling given by her small bedroom through the creation of her own world full of words and images.

Winter is coming to the city whose party never ends and many of its habitants feel the same way as Ana: isolated, in waiting mode, longing for some sea far away… But does it have to be like this? Can the cold, endless nights be turned into something more than an excuse for escapism?

Let’s get together with old and new friends to give Berlin’s insomniac nights another meaning through the power of creativity. If we aren’t sleeping, let it be for doing something we love. 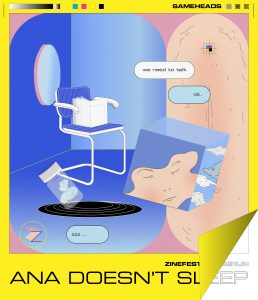